I have officially begun my rebranding!  The first step was to update my website www.nicolesportfoliosite.com and slowly start updating all my social media accounts and their links.  Most of which were either not defined (eww… default numbers!) or were already as nctmq.

Leslie O’Connor was the only ‘proper’ alias/nickname I had.  It was my twitter handle since September 2010, when I actually decided to start using Twitter, on a semi-regular basis.  (Side note: my very first Twitter was @ElephantsR2Cool which was un-excitedly just a password one of my professor created to access files for our class; and I only had a Twitter account so we could test the API using Flash, etc.)

This actually isn’t that good of a story.  Basically, I wanted a customized license plate, but couldn’t decide on anything unique that really defined me (in 7-8 characters).  It just so happened that my aunt had my grandparents old license plate, which included both of my dad’s parents initials (Norbert was my Pépé and Thérese, my Mémé), and of course we all share the same last name: Quenneville.

I then decided it would be proper to make some sort of sentence that those letters could abbreviate to.  But creating a sentence was too hard 🙁 I then decided to just abbreviate each letter individually (leaving out the first and last one to include my name) à la FITC style.

FITC used to stand for “Flash in the Can” but decided to rebrand in late 2011.  They held a contest on Twitter for the followers to come up with the new name, and they would win a ticket to FITC Toronto (my favourite!).  They ended up going with: Future. Innovation. Technology. Creativity … and here was my submission:

To me, @fitc stands for : Forward. Inspire. Transform. Create #fitcevolution

Back to my rebranding!

So I have two letters the same as FITC… and I do think I am also creative and technology-y (made up word), but at the same time, I didn’t want to just be the same as them.  I thought for a while, and decided that in reality I am not actually that “technology-y” (again, made up word).  I am more so anti-technology… and use it most times only because I have to.  (I know! Blasphemy in my field as a Multimedia Designer)

I think that in reality, I am 50% traditional, 50% technology… and have thus completed my rebranding:  A little bit good at everything. Creative. Traditional Ideas yet Technology-Driven. Multimedia Content Designer & Marketer. 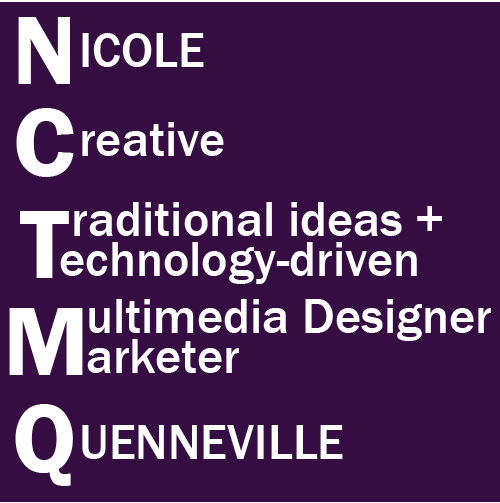 On a final note: not sure if I fully like the above graphic… but will work on it!