A few weeks ago I (finally) sent out my wedding invitations.  I say finally lightly, as I actually sent them out a bit earlier than required, but it felt like one of the longest wedding tasks so far.  This is probably because I had been envisioning the invites in my mind for so long, always thinking of the best / easiest / cheapest way to do certain things – and of course, how the overall design would be.  Because I designed and conceived them from scratch, the process took a bit longer than if I would have simply just paid someone else to do it or gotten a pre-made template.  I was 100% against this.  Actually, I didn’t even consider either of those options at all!  I went to school for Interactive Multimedia Design, so making them from scratch was the most sensible and logical thing to do. 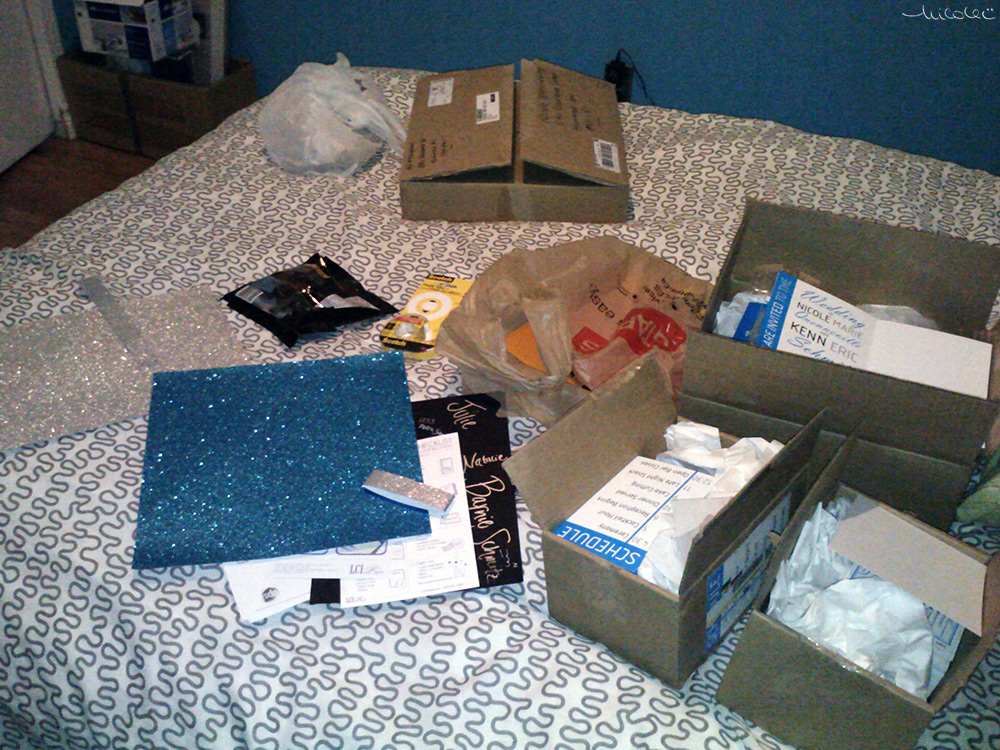 I knew that I wanted the invites to be my wedding colour: Cyan (Print Cyan/ Process Cyan/ Pure Cyan/ CMYK Cyan – whatever you want to call it… as long as you don’t get confused with “additive or RGB Cyan”).  The envelopes were either going to be silver or black, and I finally decided on black because I thought it would add great contrast and be really sharp and daring.  I also knew that I want to add sparkly elements, hence the choice of the envelope paper stock and sparkly belly bands. 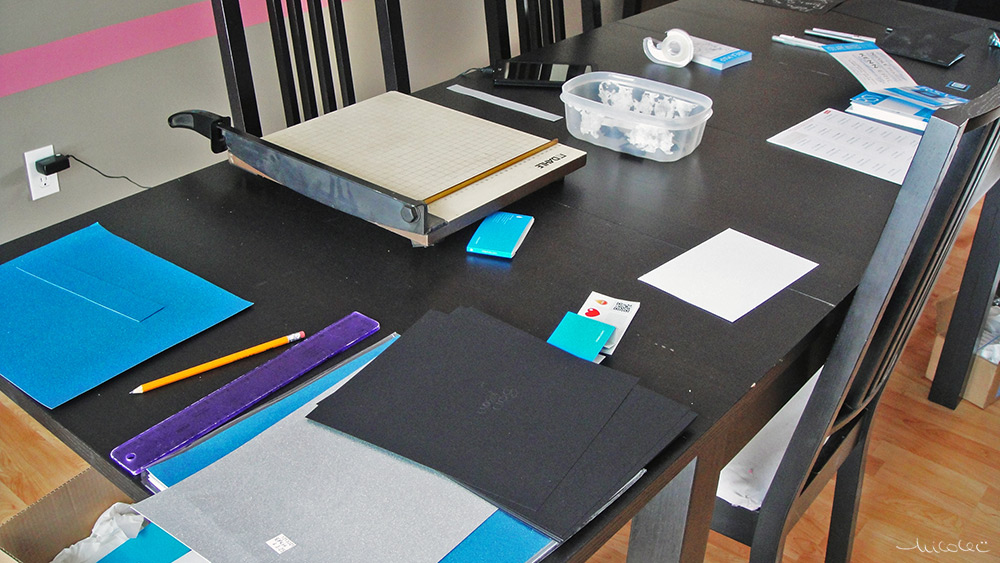 I also decided on a nice and simple wedding logo – which is actually just a lowercase monogram of our first initials in a slab-serif font.  This I used on the face of the card itself, the sticker on the belly band and on our custom Canada Post Stamps.  Oh, and we also recreated a version of it on our return address stamps on the back of the envelopes.  I wanted to keep the card as simple as possible, and opted not to use “proper” wedding etiquette invitation language.  Honestly, people don’t need to read that our wedding is in two thousand and fourteen as 2014 is shorter, better and more legible.  I was debating between getting a 5×7 postcard style or fold card, and opted for the latter because it just created a better presentation overall, and allowed for the mini-cards to stay in place and not fly around when you opened the envelope. 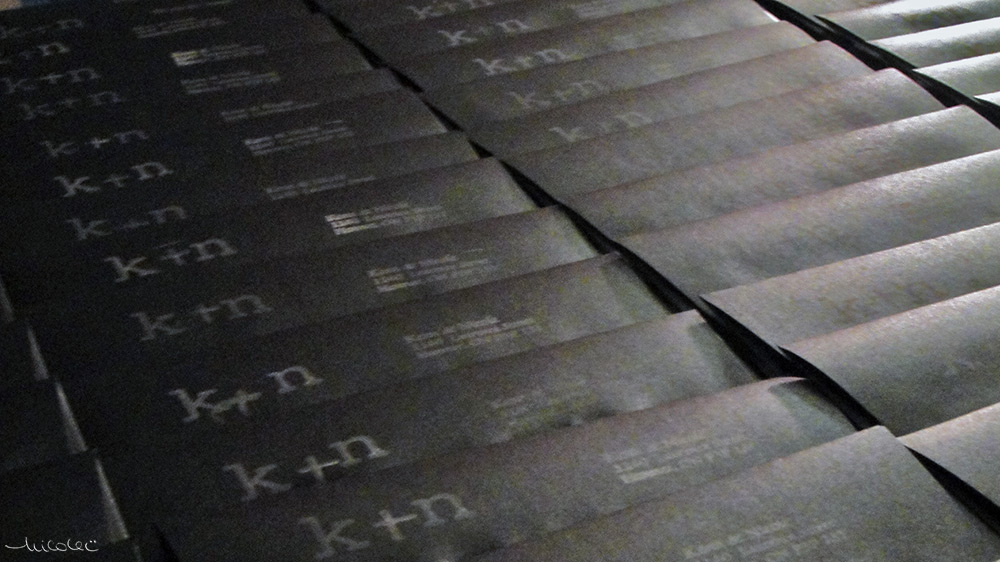 There were two smaller 4×6 postcard style cards included in the wedding invite.  The first, which is what you first see when you open the card is the “RSVP” info, which included a guest code and website link.  I chose not to do traditional paper RSVP cards for several reasons.  1) It is much cheaper not to include a mini envelope, paper and pay for postage. 2) It keeps the overall weight down of the invite and 3) did I mention I’m an Interactive Multimedia Designer?  Pah!  Obviously I’d make a custom wedding website for people to visit… I had that domain purchased months ago!   Anyways, the back of this card had a simple timeline of the evening, with details such as ceremony time, cocktail hour, reception start, cake cutting etc. 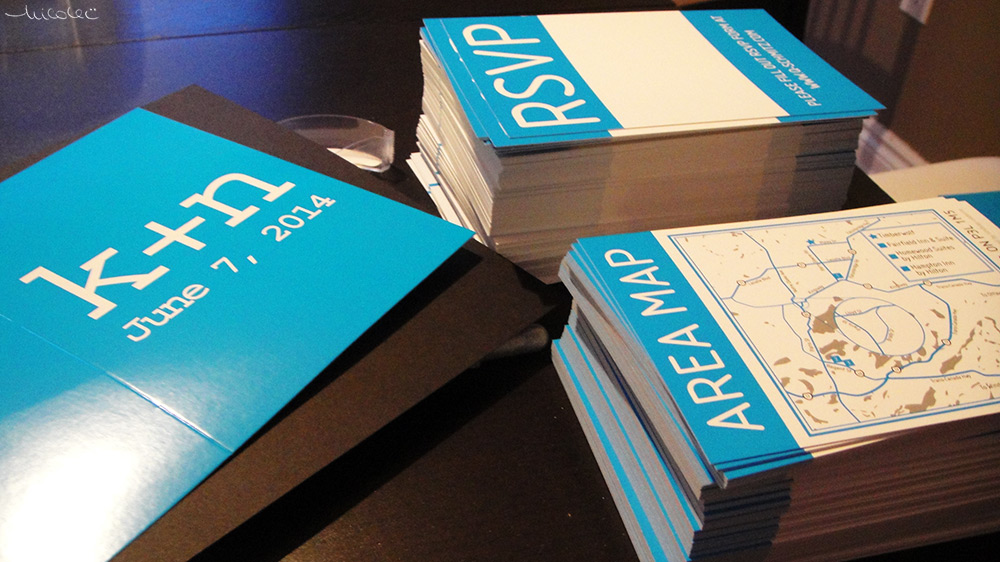 The second postcard had an area map designed by my bridesmaid Lindsay, showing an overview of Sudbury with the hotel locations and ceremony/reception area.  The back of this card had the hotel booking information.  Each separate piece of the invites are all tied together with unifying colour and font choices.  I used the same Cyan as the outside, white, black and a grey (which I will pretend is silver) – and which are also the wedding colours.  The font choices took a while!  I wanted to tie in the slab-serif from the logo/monogram… but I couldn’t see it fitting anywhere and looking natural.  I knew I wanted to use a sans-serif and a cursive font, and for some reason I also thought I needed to have a regular serif as well.  In the end I used a very futuristic/modern serif on all of the cards; and a simple but elegant script for the main invite section only. 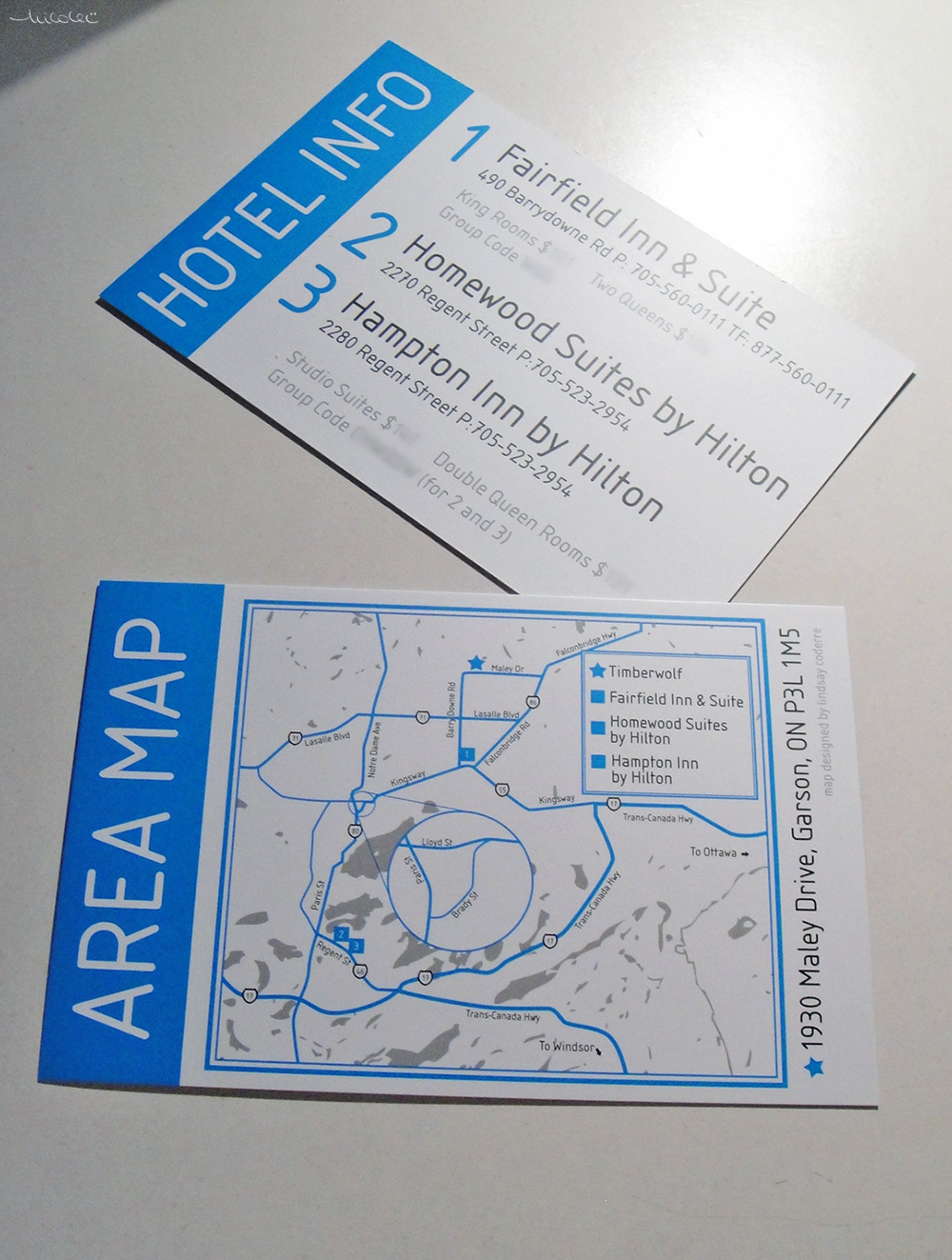 And even though it seems as there were a lot of decisions and time spent on the card design… nothing can compare to actually assembling, addressing and stamping the cards.  Thankfully I had the help of my parents, future husband and two members of our wedding party.  I created an assembly line structure: one person was in charge of tracing the paper for the belly band and “buckle”, another for cutting the paper, someone to glue the small squares to the stickers to make the buckle, another to fold the band and glue the buckle, one for folding the cards and putting all the papers in the band, and finally me who did the addressing of the envelopes (the invitees’ names in silver calligraphic gel pen and the address in white gel pen).  Once people finished their tasks they would move on to helping someone else, and finally to hand stamping the return addresses and wedding logo… but admittedly I was probably the biggest bottleneck of the afternoon.  It probably took a good 4 hours with 6 people helping, and maybe another 1 hour just me alone after that… there were over 100 cards made! 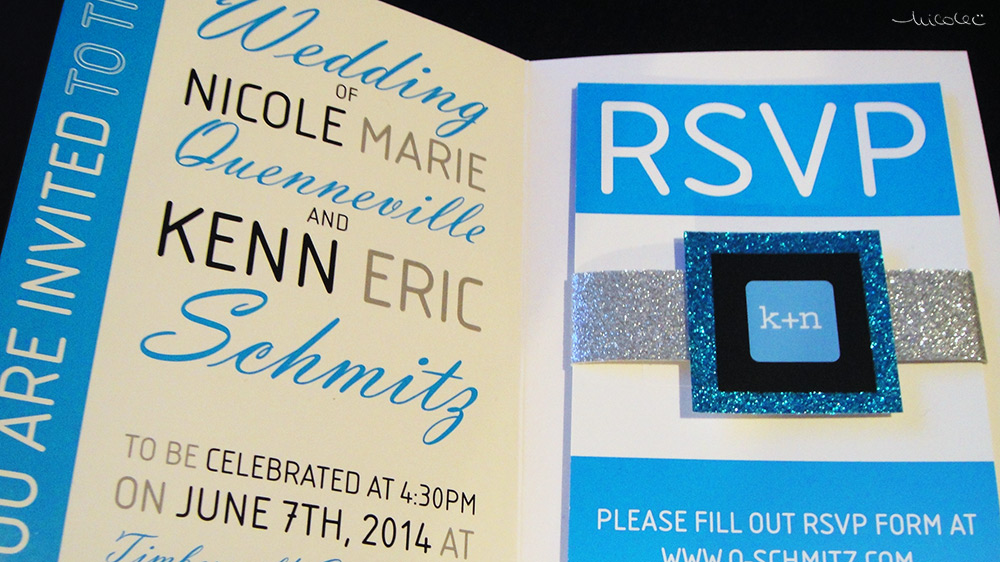 While most designs were tested and decided upon ahead of time, there were a bit of last minute changes (an example would be making the belly band buckle a half inch smaller than originally planned, because it looked too large and we would have probably ran out of sparkly paper).  All in all I think they turned out great and I really like the cohesiveness of the design from the postage stamp to the main card and even to the RSVP website. 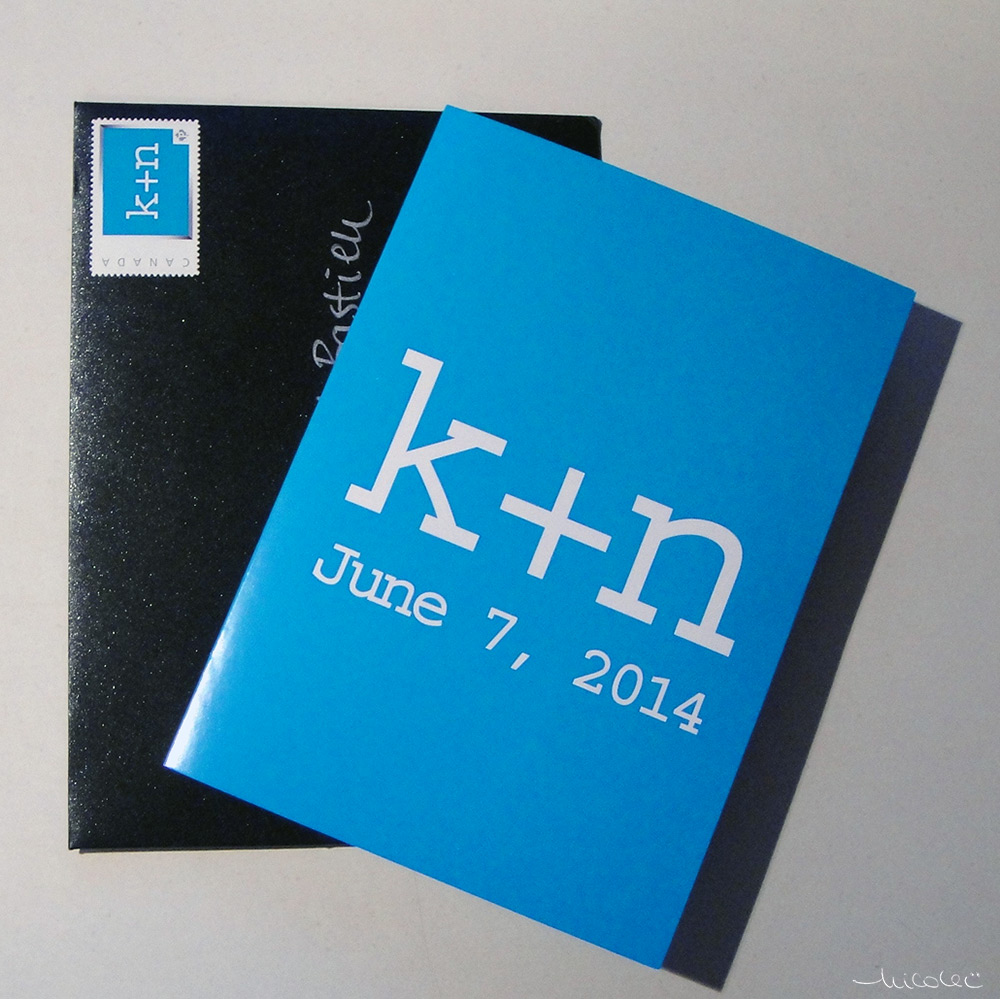 Is making your invites DIY a cheaper solution?  Maybe, maybe not.  My biggest expenses were ordering the black envelopes from the States (about 40$ for 250 envelopes, but close to 90$ in shipping/duty), having custom postage stamps (which cost maybe 50 cents more each) and printing so many copies of the cards (I wanted to get 125 each to have a bit extra… but you could only order 100 or 250, so I opted for more)… which was good since I ended up using around 110, This last one probably wasn’t that expensive since used the cheapest and best quality printing I could find, but I’m more upset about the waste of paper mostly. 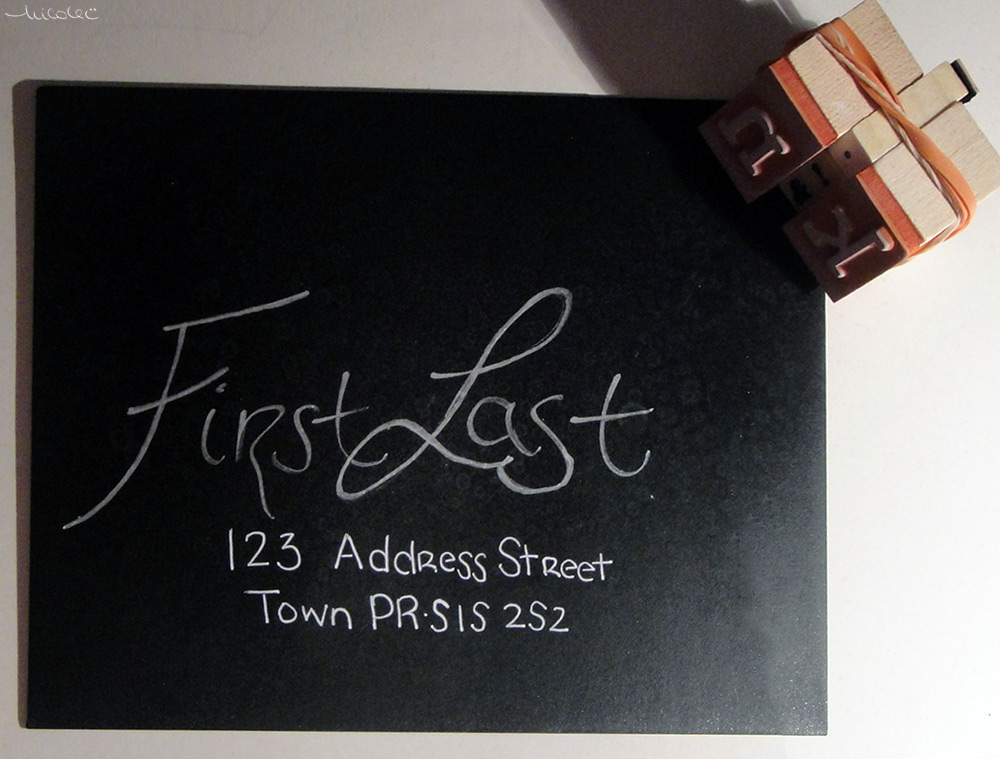 Final verdict:  DIY may not be the cheapest option, but in having myself design, address and help with assembling the invites, I was able to save a lot of money on hiring someone else to do it… and I ended up with something 100% unique and custom to me… which you can never really get with a make your own kit.