I’m 24 years old.  I’ve been out of university for just over a year now, and I’ve experienced my first “non-student” job.  In June, I wrote about how much I work, and I have to re-iterate that it doesn’t really phase me.  Only problem is that I have a significant other, and he is always trying to get me to work less, and hang out with him more.

Ohh and he currently works over two hours away, so I only get to see him on weekends.

I’ve heard the saying “You should work to live, not live to work“, and while I do not know who the original author is, my boyfriend has taken it upon himself to repeat said sentence whenever I casually mention anything to do with working.

In June I was just starting up a third job.  It’s now the end of August and I will have four jobs lined up for September.  Add to that a great opportunity to volunteer (hopefully – but I will update on that later if it actually happens) and to anyone on the outside looking in, four jobs seems like overkill.

But if you’re in a creative field as myself, or a field that allows you to work non-structured hours (think outside the 9-5 office space), then it’s all about how you manage your time.  And time management is definitely one of my strong points. In fact, half of the jobs I will be doing could be considered more “clients” from a freelancing perspective, therefore, it’s more like I only have three jobs (two of which I have to go to and be present, and two that I can do from home)… see three isn’t so bad, is it?

But back to the point of the post “Life Goals”

I figured an analogy would be easier.  So I tried to describe my life and my jobs as a pyramid; that I have so many now, but that I would narrow them down and really refine my talents and what I want to do with them and where I want to go in the future.

I thought about it further, and it really does make sense (I know… I’m a genius!)  You don’t want to learn a lot in school (or wherever) and then have to pick one stream or job that only has a bit of what you did (assuming you are not the small percentage who think they actually know going into school and coming out exactly what they want to do).

So here is my diagram of how I envision my life to be, and… well let’s say the ideal life to be (hahahaha no I am not modest or humble!)

Basically, you have a solid foundation, (developing years and education mostly) to build up your knowledge, then you build on that knowledge and really get good at things (jobs, work opportunities, volunteering, etc.) so that you can funnel up and really refine your talents into a career.  The goal of course being a career that you love and that loves you (where you shine, maybe not a lot of stress, whatever!) 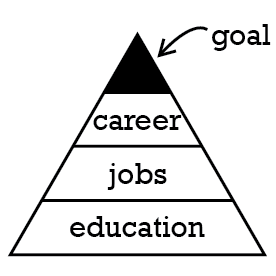 So let’s try and just compare that to what I was describing before.  If working a few jobs in different fields/streams (at the same time in my case), funnels up; working one job doing one specific thing, then switching to something completely different (but still within your education), then switching to something else… would probably look more like a Jenga game.  And we all know what happens in Jenga! 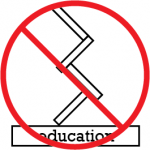 So whether or not anyone decides to take my advice is up to them.  And I will be the first to say that working more than one job at a time is not for the weak.  But always remember, it doesn’t have to be traditional “jobs”.  It could be freelancing, or working on side projects, whether you are paid or not.  As long as you are always exploring your creative options and taking the time to not be stuck or stale where you are, then that’s fine.

So, as of me now, a 24 year old semi-recent graduate, I think I am in the perfect position (well, unless I am not and this whole post was me trying to convince myself that I am not… nah!).  The boyfriend on the other hand still thinks I am crazy and will be a workaholic forever… but I guess he will just have to accept it for now.  I mean, who knows what I’ll want to do once I start having children!  Although ONLY being a stay at home mom is not an option (I say only with emphasis, because I could be “at home” and still working of course… but I would never give up working just because I have kids).

In April 2012 I wrote about my career goals.  It’s been over a year since then, and they all still ring true.  Let me finish off by adding a few more!

Although technically the last two would still be considered having two jobs at the same time… I guess you can’t cure workaholism after all!