When social and TV combine, do brands become “too social”?

I don’t necessarily mean that television brands (ie: shows) should sit back and not be social at all, but at what point does the propagation of their own hashtags and social topics become too forced?

Tom Fishburne’s great blog post and cartoon (see below) really sum up the issue.  He states that “Many brands assume that consumers are dying to join a brand’s conversations. Instead, consumers have conversations with each other.”

I’m going to focus on Master Chef (season 4)  which I watch online on CTV. Since the start of this season, there have been a few hashtags per episode that have appeared on the screen.  Some semi-recent examples include #101Firefighters, #cook4glee, #mcswap etc.

Now, I’m going to assume that this season was filmed a while back, and each episode airs weeks, maybe even months later.  There is most definitively a team of social media moderators that are following and replying to these conversations as the episodes are shown on TV.  They even have Twitter, Pinterest, Tumblr, Google+, Facebook and Instagram accounts, each pumping out various content and posts (although some are updated more than others).

Doing a twitter search of #mcswap, I only found 3 viewer generated tweets and each one of those was replied to by the main MasterChef account… not much actual conversation there…  While some of the hashtags they “use” do get more posts in relation to their content, some posts are not relevant at all.  For example, both #janelynch and #joesmom are used in other contexts as well.

Another thing I would like to mention is that every contestant on the show has their own designated Master Chef Twitter accounts! (All which started posting around May 22nd, when this season first aired).  At first I thought that they would all be generic content, with posts created by the show’s social media team.  However, each contestant has different amounts of tweets and even continue to tweet since being eliminated.  This may be in some sort of contract, where they have to keep actively tweeting until the season is over, so that they don’t reveal who the winner is…

Most reality contest shows have strict policies that the contestants are unable to say who won until it is shown on TV.  But wouldn’t they also have a policy dictating things they can and can’t post on twitter using their @MC4___ user names?  Do they have to submit their content to a team for moderation before they post anything?  Did they all have to be trained with how to use twitter?  Are they able to keep their @MC4 accounts after the show is over?  I guess we can only wait and see happens when this season is done!

I’ve only talked about Master Chef, but what other television shows are there that fit into this example?  While most will employ the use of created hashtags, do any others allow their contestants or even their fictional characters to have their own social media accounts?

The real question is, are these brands really creating conversations, or are they just forcing them? 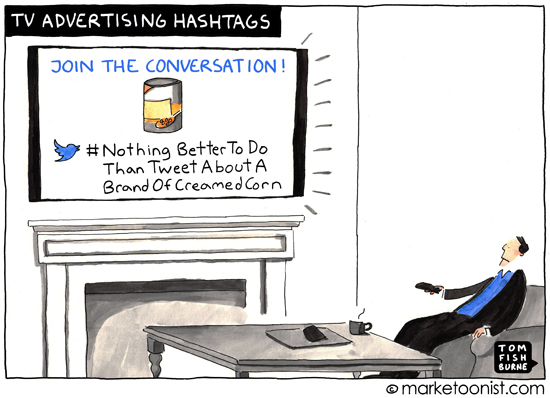