I’ve been living in my current house for less than one year.  It’s the first place i’ve ever lived that does not have a mail box at my door, or at the end of the driveway.  I have to walk/drive to get my mail because it’s at a kiosk a bit down the road.  Which is fine; it’s covered and lit up so I can get my mail at night, or in the rain if I wanted.

I work two jobs.  One of which is over an hour drive away; the other is more local, but takes most of my weekend time and even some weeknights.  Because of this, i do not go check my mail box everyday (as i would if it were at my door).  I try and get my mail once a week, usually a weekend, and sometimes at night after work (anywhere between 10pm-1am).  So the lit and covered kiosk works well.

Last weekend it was unusually gorgeous for May; temperatures were warm and I had some free time on the Sunday morning to go get the mail.  As I arrived at the kiosk, I noticed some construction crews had blocked off most of the parking lot/paved section and there was a cardboard sign posted.  I originally ignored the sign, and went to go open my little mail box.  No mail.  Ok… so i decide to go read the sign.

The cardboard sign stated that the kiosk was being transformed into stand alone mail boxes instead, and that we would have to go pick up our keys at the post office, hours 8am-5pm

Well i figured since the sign says construction was May 4-5 and then it offered the hours… that the post office would be open those days and those hours.  And yes, i knew it was a Sunday, but the cardboard sign didn’t offer any more details.  So i drove to the post office… and oh look it’s closed (obviously, since it was a Sunday).

I then drove back home and decided to check Canada post online to see if they had any policies for appropriately notifying residents that their mailboxes would be moved, but i could not find any.  I did use their online contact form and let them know that they should have perhaps let residents know ahead of time, rather than posting (an unofficial-looking) cardboard sign the day-of.  I even suggested they had mailed residents to let them know!!! Wouldn’t that make sense? The post office sending you something…! The least they could have done was left our new keys in our old boxes…

Alas I had to wait until Friday to go and get my new key (since the post office is open until 6pm that day… which i confirmed on their website).

SO! Flash forward to Friday evening, when I made a special trip out to the post office, and even got there slightly after 5:30.  And to my surprise, THE POST OFFICE WAS CLOSED!  And a new sign was posted at the entrance, saying that the hours were monday-friday 9-5 (although there were no other signs saying that these were in fact “new” hours); i guess they just assumed no one would notice?

So i am again upset and decide to go back to their website to check the hours posted again.. OH WAIT! The old hours are still posted online!

SO not only do I not have my new keys, but I have NO way of getting them… as the sign also mentioned that we would need ID to pick up the new keys (meaning I can’t ask anyone to go pick them up for me).

I think i will call Canada Post on monday, and try and let them know my situation.  Ohh and it should also be noted that on their website it mentions that if they close a Post Office, another one will have EXTENDED hours to make up for it.  Not only do they NOT have extended hours, but they have REDUCED their original hours.  (Click here for where I got this information)

I understand that with more people using online technologies to write to people, or pay their bills; that less people are using the postal service.  However I do not understand that the hours of 9am-5pm work for any working people, as these are primarily normal working hours.  Why can’t you perhaps close on a Tuesday, and offer extended weeknight hours a thursday or friday?  Or even a couple hours on a Saturday?

And more importantly, if I don’t have a key to get my mail, and the post office is closed when I am free…. how will i get my mail?  How can you say that less people are using a service, and then reduce your hours so that in fact, less people will be able to use your service? 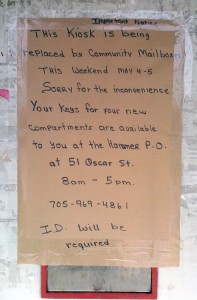 Update: Called the local Post Office this morning (Monday May 13) where I am supposed to pick up my keys and I was told that their hours have been 8am-5pm for over a year (so I guess the website is wrong?)  and that apparently our new keys have been in the mail box for at least 3 weeks (she said).  That’s strange since I go there once a week… and have not seen my key or any notice.  I can OFFICIALLY state that the last documented time I got my mail was the weekend of April 20-21, as I received and paid a bill then.  So perhaps they put the keys in the following Monday (and assuming I must have forgotten to go a week?)

Then i was told that they had just taken the keys out the Friday before I saw the sign (May 3rd) but that the construction on the new kiosk didn’t go as planned so they put them all back in on the monday (6th) and then took them all back out the next friday (10th).  Which seems like a lot of work to me…?  And now the kiosk is down and the only option is to pick up the keys at the post office.

I mentioned this to some people, and they suggested having someone else go to post office and pick up my keys for me.  This was the main reason I was calling the post office, to see if they would allow this, even though their cardboard sign said “photo i.d” (which i figured meant that only I could get it).  Lo and behold i am NOT allowed to have someone else pick up my keys.

I then suggested if it was possible to have the keys available at the nearest post office counter, which is located inside a Shoppers Drug Mart (with VERY convenient hours) as this is where I pick up my packages.  I was told that this was not an option.  (On a side note: Imagine if I had to pick up packages at this main post office… guess I would never receive anything since they are not open at convenient times for me!)

Finally, I asked how long they would hold my keys, and what happens to my mail if i don’t pick it up.  The answer is that they will have the keys forever (until I claim them) BUT if my mail box gets too full, that I will get a warning message; and if I still don’t get my mail, then they will start to send it back to the senders.

Ohh and P.S. : My main job is a contract position, meaning I don’t get any time off or vacation days, so if I don’t come in for an hour or so, I have to make up the time somewhere else.  And YES that could be an easy solution, but the reason for this blog post is based on the frustration of the whole situation, and that it could have been handled better.

And BTW, I don’t think a week only includes Monday-Friday… so please don’t tell me you had the keys in the box for another “week” when in fact, you did not.

Update-Update: Boyfriend got the keys.  Check the mail for the first time in about a month (lots of course).  But within it, a nice letter from Canada Post letting people know about the new change over to community boxes.  Funny thing about the letter, it’s dated “May 5th”… which would mean that the person at the post office in fact lied when she mentioned that residents were informed for several weeks about the change.