I’ve recently been given the opportunity to work as a Social Media Moderator/Content Creator via one of the contacts I made at my current job.  I can put as much time into it as I want, can work from home, and much of the initial setup has already been done.  This particular client is a sports team (hockey specifically), therefore there would not be as much work to do during the summer months (great… since I already have two other jobs!).

When I informed my boyfriend of this, he was happy that I could work more towards my field of Interactive Multimedia Design (compared to one job, which is not related).  However, he suggested that I quit said un-related job as I only work part-time, and for less money than he thinks is “good”.  He then told me I was a work-a-holic (hey I am Type A after all!) and that I work too much and never hang out with him.  (On a side-note, we are also planning a wedding … yay!)

But as you can see, I definitely have a lot on my plate.  My dad also refers to me as the “Hardest Working Girl in Sudbury” but I really don’t think that is accurate.

And to the point of this post!  I decided to create a graph of what a typical week in the life looks like for me, using the months of April/May as a general reference.  Ohh… and I should also add that because of the summer months, I have joined two (not one… two!) recreational sports leagues… so more of my time should be taken up with that in the near future! 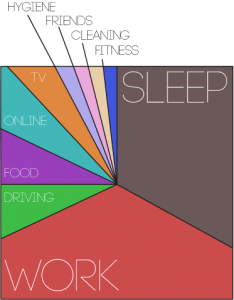 So here it is!  And here is a quick summary:

So I will create new graph in a month or so… and see how it compares! (stay tuned…)

As a side note, I first made a simple pie chart in Word/Excel and input all the hours.  I had some missing to make up the week, so I just pumped up some categories that I may have underrated (online, working, driving).  I then copied the image into Illustrator and retraced all the pie sections.  Then I remembered that I hate circles (plus I wanted to be a bit fancier!) and put it in a square shape, and tried to make sure the data didn’t get too skewed (as in the corners, where it becomes elongated).  Input the titles and voilà!

So what do you think?  How does your weekly time compare to mine?

One thought on “A Week in the Life”